Encryption is a method to protect the data stored on any of your device, a laptop, a PC, a smartphone or any other gadget that you use to store your data. The word Encryption may seem a bit technical but it simply means password protecting all your sensitive and confidential data that you don’t want to put at risk. In the investigation case of a shooting incident which triggers a battle between Apple and FBI which enhanced and raised the need for encryption, you might have another opinion about the case but you can’t deny the importance of keeping the data secure with a personalized encryption key which saves it from any hacking, spamming of data theft attempt and even if your encrypted phone is stolen or falls in wrong hands you might not have to worry about your data stored on your smartphone which can include your personal information, your email accounts which can have your financial and bank statements, your credit card details, your private conversation, images, videos, contacts etc. and it would be a nightmare for you if it is exploited by any cyber criminal like hacker, spammer or any other snooper. So, protecting your data with encryption is the best and smart idea to get rid of all such issues and you should really think about encrypted phone.

What is Encrypted Phone?

There are three main kinds of encryption;

First two encryption types – “Encryption for Data in motion” and “end-to-end encryption” are for the outgoing and receiving messages on your encrypted phone and target to prevent any unauthorized person to read the communication of your device. The third type of encryption – Encryption for data at rest, is for the stored data on a device memory.

Why Should I Encrypt My Phone?

Millions of people all around the world use smartphones these days and store personal information in their phone from their personal data to your private chats, images and videos, and imagine when thousands of phones got stolen each year and if your phone is one of them which falls in the wrong hands who could get the access to all your personal data and sensitive information, doesn’t it sounds scary? Here are some reasons you must use encrypted phone.

Encrypting your phone ensures the security of your phone’s data which even in the wrong hands can’t be exploited and distributed. You can store whatever information and data you want on your encrypted phone without any worry. Encrypting your phone data might sound difficult and technical but it as simple as keeping a password encryption for your file, folder or a whole device, after encryption your data is converted into a coded, scrambled and an unreadable form protected with an encryption key which is used to decrypt the data so it is only accessed by the person who knows the correct encryption key, otherwise all your phone data is secure and safe.

Data Safety, even if your phone is sold

When you decide to change your old phone by selling it and then getting a new phone for yourself have you ever thought for the data stored in your phone memory and hard drive that is retrievable even after deletion of all the data ? Many people ignore this fact that while giving off their mobile after using it for a long time may cause their personal information and data to be accessed and exploited, when used by any other person and if that person’s intention are not right it can definitely not be in your favor. So the best thing to do is to encrypt your phone’s data and never be worried about your personal stuff on an encrypted phone.

What on your Phone can be encrypted?

Normally everything on your encrypted phone that use an internet connection to run can be encrypted, so what about your text messages and call? encrypting them is not an easy task, but still there are some apps like Silent Phone or Signal, that route voice calls through the Internet using VoIP, and even more apps, such as iMessages, that turns text messages to Internet-based instant messages if the person at the other end is also using the same app for text messages. Emails on the phones have one drawback, everything in it from message content to attachments can be encrypted but the sender’s and receiver’s addresses are still visible to anyone despite encrypted email, however, email logs can be encrypted on your phone.

How to Encrypt a Phone?

Generally there are two major and the most popular smartphone operating systems used by millions of users around the globe Android and iOS (iPhone/ iPad) and below we will discuss how you can implement the encryption in both of them using the built-in features and the later in the article we will discuss some third-party apps used for the phone encryption purpose.

Most of the Google’s Android phones and devices are not encrypted by default and users never bother to change the default setting usually, if you are reading this article and own an Android phone then you must be curious how to encrypt android phone by using some built-in features of Android phones, well encryption is more difficult in Android phones than in iOS. Some new Android phone models like Google’s Nexus phones and tablets come with encryption enabled by default. New android devices that ship with Android 6.0 Marshmallow, such as the Galaxy S7 and Galaxy S7 Edge, are also encrypted and all you have to do is to set a security and encryption code to activate it and then every time you unlock your encrypted phone it will ask you for the pre-set encryption key and then you can access the encrypted phone by entering the correct key. Follow these simple steps to setup encryption key in Android phones;
1. Go to Settings of your mobile phone and then select Security/ Lock Screen and Security.
2. Then go to other Security Settings and click on Encrypt phone.
3. Now you will be asked to set a password, encryption key etc. decides a complex combination hard to guess by anyone who knows you and click Apply.
4. Remember to keep your encryption key or password safe and secure and store it somewhere you can never lose it otherwise you will be locked out of your phone. 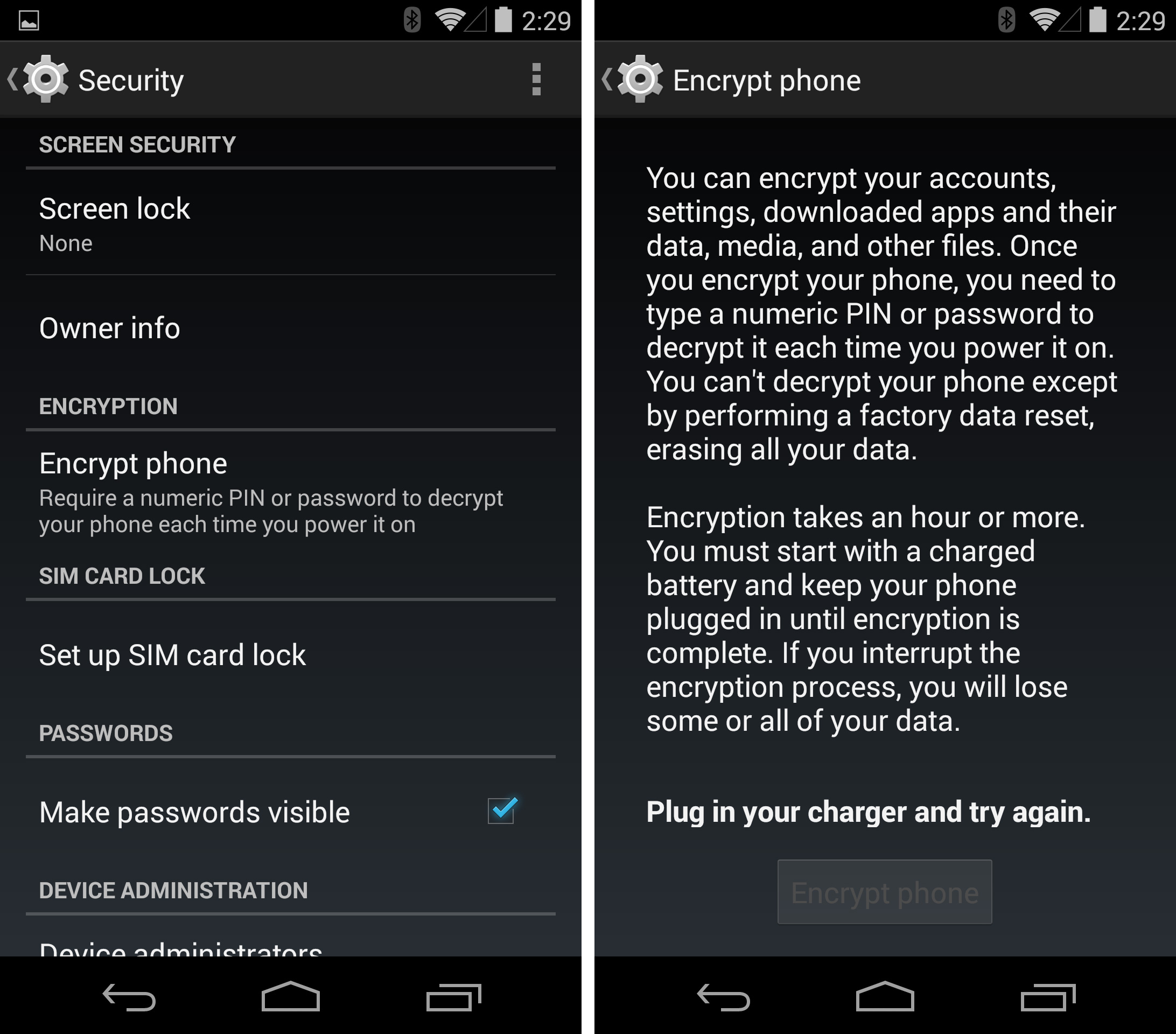 Apple introduced device encryption feature in iOS 8 in 2014, which was easy to set up and require a minimum of four digit code to set and each time you unlock your phone by adding the code and the device is easily decrypted, it is recommended to keep a complex set of numbers as your passcode to keep the iPhone encryption level high. Follow these simple steps to setup encryption key in iOS 8 onwards;
1. Go to Settings of your iPhone and then select Touch ID & Passcode (or Passcode for older devices without a fingerprint sensor).
2. Now click on the Turn Passcode On option and enter a strong passcode or password.
3. You have now a secure and encrypted iOS device and only a person who knows your passcode can access your device and decrypt the data stored in the device.

When you use the internet on your mobile device all your online activities are monitored by your ISP, NSA and other government security and surveillance agencies. After the revelations of Edward Snowden, no one on the Earth can deny these facts. However, you can get rid of this annoyance and snooping by intruders with a VPN for your Android or iOS (iPhone/iPad). A Virtual Private Network is a tool which provides you a private and encrypted tunnel between your device and VPN server and transmits all the data that you send or receive through this secure encrypted tunnel away from all the prying and spying eyes, with the high-end encryption level of AES-128 bit encryption and AES-256 bit encryption. This level of encryption provided by a VPN is a comprehensive kind of security and privacy, because due to this everything you do on internet browsing, surfing, downloading, chatting, streaming, torrenting, uploading etc. all the activities are away from the intruders and cyber criminals which make your data absolutely secure.

There are many third-party encryption apps that can be downloaded on your iOS or Android phone which encrypts all your data, text messages, calls by converting and routing them through an encrypted form via the internet. Below is the list of top Apps for iOS and Android phones which provide encryption for texts, messages, chats, call etc.

The free iOS and Android app provides you absolutely encrypted voice calls. Signal uses your phone number, doesn’t require a password, its contact discovery to immediately display which of your contacts are using Signal and automatically encrypts your communication. Under the hood, it uses ZRTP, a well-tested protocol for secure voice communication. It simply protects your private call conversations and prevents NSA and other government snoopers to infiltrate your voice calls.

If you own a business or if you are an individual who is concerned about his/her privacy and security then this app can solve your problem. Their Silent Phone software is available on Android and iOS and allows users to call and text with complete privacy.

It is also a great encryption app to secure conversations with other Telegram users. Best of all, Telegram is a cross-platform application which is not only available on iOS and Android, but on clients for Mac and PCs.

This app is developed by Open Whisper Systems as recommended by Snowden himself in one of his articles. Text Secure enables secure and encrypted voice calls and texts. It’s available for Android and iOS.

In this world where we are so much dependent on our mobile phones for everything we do from keeping financial information to storing private conversations and private data (images, videos etc.) encryption is a thing which can’t be ignored if you don’t want your private and sensitive data to be in bad hands. It gives us a sense of security and relief even our phone is stolen or sold the data is in a form that is unreadable by anyone who doesn’t know the encryption password. A powerful method to enhance your security to avoid any data theft attempt.

Our mission on beencrypted to put our maximum efforts to prevent cyber attacks and data theft, by providing complete encryption guide on each purpose. Join our hands and Be-encrypted. Contact us:

Scroll back to top